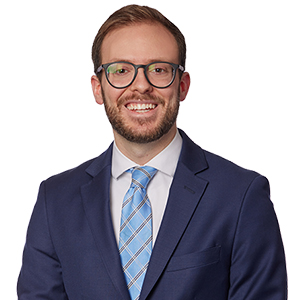 A Stark County native, Drew joined Schulman, Roth and Associates as an Attorney in 2022 and devotes the majority of his practice to representing individuals and local businesses. His practice includes personal injury, construction, Real Estate, and contract litigation, as well as business and corporate law. Prior to joining Schulman Roth, Drew practiced at a large firm and was heavily involved in insurance defense work. His prior experience as a defense lawyer gives him a strong understanding of how insurance companies and lawyers operate. Drew has also assisted in several high-profile cases, including the Gibson Bakery case—the largest defamation verdict in Ohio history.

During his law school career, Drew worked for both the Canton Prosecutor’s office and the United States District Attorney’s Office and was selected as one of three students in the United States to attend Gerry Spence’s Trial Lawyers College in Wyoming—a comprehensive three-week program focused on conducting and winning trials.